By AliNovember 1, 2022No Comments5 Mins Read What are LEDs and how do they work?

LED stands for light emitting diode. LED lighting products produce light up to 90% more efficiently than incandescent light bulbs. How do they work? An electrical current passes through a microchip, which illuminates the tiny light sources we call LEDs and the result is visible light. To prevent performance issues, the heat LEDs produce is absorbed into a heat sink.

The useful life of LED lighting products is defined differently than that of other light sources, such as incandescent or compact fluorescent lighting (CFL). LEDs typically do not “burn out” or fail. Instead, they experience ‘lumen depreciation’, wherein the brightness of the LED dims slowly over time. Unlike incandescent bulbs, LED “lifetime” is established on a prediction of when the light output decreases by 30 percent.

How are LEDs Used in Lighting

LEDs are incorporated into bulbs and fixtures for general lighting applications. Small in size, LEDs provide unique design opportunities. Some LED bulb solutions may physically resemble familiar light bulbs and better match the appearance of traditional light bulbs. Some LED light fixtures may have LEDs built in as a permanent light source. There are also hybrid approaches where a non-traditional “bulb” or replaceable light source format is used and specially designed for a unique fixture. LEDs offer a tremendous opportunity for innovation in lighting form factors and fit a wider breadth of applications than traditional lighting technologies.

LED is a highly energy-efficient lighting technology, and has the potential to fundamentally change the future of lighting in the United States.  Residential LEDs — especially ENERGY STAR rated products — use at least 75% less energy, and last up to 25 times longer, than incandescent lighting.

Widespread use of LED lighting has a large potential impact on energy savings in the United States. By 2035, the majority of lighting installations are anticipated to use LED technology, and energy savings from LED lighting could top 569 TWh annually by 2035, equal to the annual energy output of more than 92 1,000 MW power plants.

How LEDs are Different

LED lighting is very different from other lighting types such as incandescent and CFL. Key differences include:

LED lighting is available in a wide variety of home and industrial products, and the list is growing every year. The rapid development of LED technology has resulted in increased product availability, improved manufacturing efficiency, and lower prices. Below are some of the most common types of LED products. 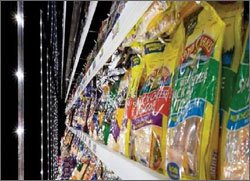 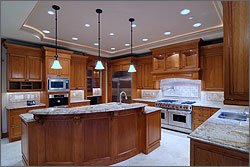 Because LEDs are small and directional, they are ideal for lighting tight spaces such as countertops for cooking and reading recipes. Since there can be variation in light color and directionality, it is important to compare products to find the best fixture for your space.

Recessed downlights are commonly used in residential kitchens, hallways, and bathrooms, and in a number of office and commercial settings. DOE estimates there are more than 600 million recessed downlights installed in U.S. homes and businesses.

With performance improvements and dropping prices, LED lamps can affordably and effectively replace 40, 60, 75, and even 100 Watt incandescent bulbs. It’s important to read the Lighting Facts Label to make sure the product is the right brightness and color for its intended use and location.

LEDs consume far less electricity than incandescent bulbs, and decorative LED light strings such as Christmas tree lights are no different. Not only do LED holiday lights consume less electricity, they also have the following advantages:

How to Make an Anniversary Extra Special

How to Improve Your Garden & Backyard Aesthetic